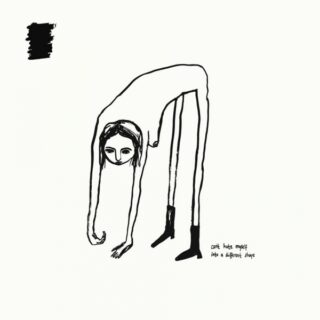 “Imagine the illegitimate love child of Florence Welsh and PJ Harvey – a goth teen who listens to Radiohead and reads Murakami.” An interesting bio introduces half-Danish, half-Faroese, Sweden-based singer-songwriter Helena Heinesen Rebensdorff’s musical persona, Brimheim. Already a staple in the Nordic queer music scene, having made herself known to a wider audience with her EP last year, Can’t Hate Myself Into A Different Shape is the debut full-length from Brimheim.

The intriguing album and track titles, together with the self-professed influence of the likes of Mitski and PJ Harvey, set the expectations high for these ten songs. Unfortunately, those expectations are rarely met.

After an auspicious, if overcharged, start with the short ‘Heaven Help Me I’ve Gone Crazy’ (though a bit overcharged) and the following title track, some of the shortcomings begin to show. Can’t Hate Myself Into A Different Shape is a pure pop album, winking more to the most garish qualities of purely commercial music than to the more sophisticated and nuanced sides of the genre.

‘Hey Amanda’ is a particularly low point, with chart polish overpowering a juvenile story of long-term, long-distance friendship in a manner that’s more reminiscent of a very young FM radio station sensation than the much-trailed Björk or Phoebe Bridgers influences. The same sadly also applies to ‘This Week’s Laundry’, whose promising lyrics are weakened by melodies so glossy and oversung it’s easy to lose interest in them, overwhelmed by the maximalist performance. More widely, this surplus of delivery and sound affects the entire album, making it way less incisive and compelling than it ought to be. And it’s a pity, considering the high level reached by the closing ‘Hurting Me For Fun’. We can only hope that highlights like this can make a good basis on which to build a more effective future.