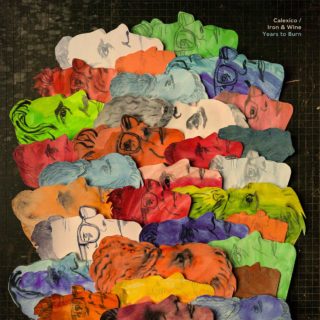 The hobo mystique and sweet feint of Bob Dylan’s Rolling Thunder Revue saw the rags and the riches put aside their differences with a hit or two of heroin. All allegations denied, of course. Music was fuelled by the slight of hand and the experimentation; Rolling Thunder was a scene where familiarity met fatigue, but where the strength of the song in each of its iterations was King. It’s an ethos in revival: thanks, Netflix.

Calexico and Iron & Wine’s first collaboration released almost 15 years ago was forged from the same tools. Their joint EP, In The Reins, came without individual precedence or reputation in 2005. The quality of their composition was brilliant, as Southwestern lap-steel collided with serrated horns, and Country and Western opened itself up for real and exciting variation. You can’t help but think that this, their first full length album recorded together, has come roughly a decade too late.

Nonetheless, Years To Burn has a really timeless sound to it. This may as well be a collection of songs for the Midwest front porch: a tick-list for those with a rocking chair, a wooden terrace, a bottle of liquor. It’s here to listen to as the night falls slowly to the sound of crickets. Something out of a Faulkner novel, or any film set in Memphis in the last decade.

At its best, tracks like ‘Midnight Sun’ wash into the alt-folk expanse. Sam Beam’s hushed chest-voice takes on Cat Stevens on ‘Father Mountain’, sounding whispered into a small cupboard before a wonderfully sparse horn section on ‘Outside El Paso’. A lot has changed in 15 years. ‘What Heaven’s Left’ is just ‘You’ve Got A Friend’ with a slightly gratuitous trumpet. The drawn out, weathered experimentations to introduce ‘The Bitter Suite’ do little to enhance a really lovely song. There are flashes of great folk songwriting in most of these tracks, but something’s lost now they’re free from pressure with nothing to prove.

This album proves it: Dave is the voice of a generation of young Londoners