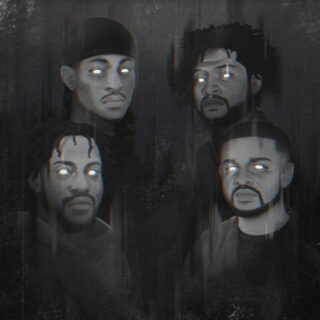 During the early 1960s, the term “Tottenham Sound” shoe-horned itself into the musical press’ lexicon as a way to refer to North Londoners The Dave Clark Five, The Beatles’ chief rivals in their early years. Desperately trying to capitalise on the marketing success of the “Mersey Sound”, the “Tottenham Sound” label was short-lived, swiftly unmasked as the superficial PR trick it was. Nearly sixty years later, the “sound” is back, but in an entirely different sphere – grime.

Whereas (East London postcode) E3’s grime sound is defined by its unrelenting pace and ascending intensity, Tottenham’s N17 identity is increasingly built on dense atmosphere and cyclical paranoia. If E3 is the Sex Pistols, then N17 is Joy Division. Norf Face assembles Tottenham’s best tour guides in Boy Better Know’s Tottenham contingent of JME, Frisco, Shorty, and the supremely under-rated MC Capo Lee, to drive you through the ends in a little over 20 minutes and across nine tracks.

The woozy, nocturnal beat of lead single ‘Baitest Sound’ is a baptism into N17’s backstreets, where things go boom in the night. The Skepta-produced beat is reminiscent of his sundowning sound developed on his 2019 album Ignorance Is Bliss, with the track’s high-pitched, bad-trip production the perfect backdrop to the ballsy posse cut.

In-between each of the five collaborative cuts, each MC has their own ‘Pattern’, where they take the reins for a minute or two. ‘Frisco’s Pattern’ is the stand-out, with his robust bars navigating a mangled beat that has shades of P-Money’s ‘Gunfingers’, boasting over it that his “Flow’s so deep / You better draw for your snorkel”. ‘Look Both Ways’ is Norf Face at its most mesmerising, with the layered production feeding the dense dark dub into a looped and light compressed organ, the two contrasting like the glistening lights of the empty Tottenham Hotspur Stadium in the dead of night. Album closer ‘More’ incorporates what sounds like backgrounded Gregorian chanting as the crew do their best E3 impression with JME exploding on the string-dominated high-BPM track with savage bars that cut the album to an abrupt, breathless stop with JME rejoicing “We made it from back then”.

First and foremost, Norf Face is a work in the vein of last year’s Insomnia, an unselfish collab that is fresh, funny and frantic. However, it also happens to be the first true testament to the real “Tottenham Sound”, one that we can update and christen the “N17 Sound”.