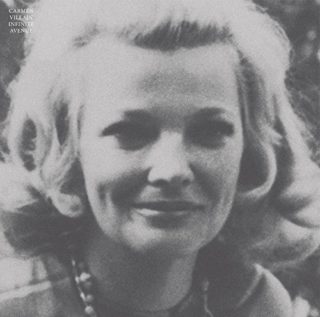 Carmen Villain is being hard on herself when she confesses, “I’ve got potential but there’s demons in me.” The latter may be true but on her second album the Oslo-based musician shows more than promise. Where her 2013 debut ‘Sleeper’ was compared to Royal Trux and Sonic Youth, her follow up takes on a more reflective tone. At times this straddles the ground between psychedelic folk and ambient (the title track), while at others it recalls the dream-pop of Cigarettes After Sex (‘Red Desert’).

In the cracks between these ethereal wafts, however, there lurks unease in the dense layers of sound she builds. This is where pianos echo desolately, instruments quietly distort with anxiety, and muffled drum patterns shuffle. It’s a millennial disquiet that’s heard to striking effect on ‘Borders’. A nightmare of half seen shadows that features Jenny Hval on co-vocals, it sits mid-way between Warpaint and Lykke Li.

With its whispered lyrics and insistent, muted drums it’s as genuinely disturbing as the rest of the album is beautifully sad.