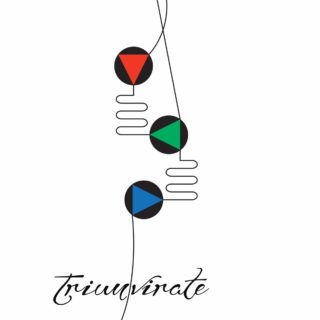 For the 2011 Short Circuit festival, Mute Records invited Chris Carter and Cosey Fanni Tutti – aka Chris and Cosey, previously 50% of Throbbing Gristle – to collaborate with Factory Floor’s Nik Void. This would be a forty-minute live performance for an audience of 200, intended as a one-off. How, then, has this project found an afterlife that’s spawned across this decade, and watched the stock of its participants rise immeasurably during these years?

Triumvirate is billed as the final collaboration between the trio, and it comes at the point during which Chris and Cosey’s stock couldn’t be higher, their recognition finally in place. First there was their work during the 2017 Hull UK City of Culture programme, then Cosey’s acclaimed memoir, and then separate solo albums by the pair. And as the mainstream of British music has taken a palpably weird left turn, the pair have emerged as unlikely elder statespeople for a new generation blurring the boundaries between noise and art without permission from above.

Though all three musicians operate firmly within electronic parameters, let’s not forget that they’ve all made much more psychedelic (and in the case of Chris and Cosey, pastoral) music than many of their electronic contemporaries. This is no different on Triumvirate – it may open with a hard-angled industrial banger that brings to mind Chris and Cosey’s early ’80s apex, but this is something of a red herring.
‘T_3_3’ is the sound of confusion; tight techno blurs into focus before disappearing again. Just what is going on? Note the searing Robert Fripp guitars that scratch against strangled, treated vocal wails on ‘T_3_4’, as the album pivots further and further from its initial destination.

All of Carter Tutti Void’s output is recorded at Chris and Cosey’s Norfolk studio, and regularly the haunted pastoral of the countryside bleeds into their work. “I felt like I’d learned what I needed to learn from London,” explained Void of collaborating in a rural setting. “I felt I needed some peace and no distractions.”

The working process adopted on their previous records has stayed in place here; rhythms built by Chris Carter, before a thorough process of addition, subtraction and alchemy between Cosey and Void. The record, and this collaboration, may end somewhere close to where we begin – with the final track pulsating us back into dancefloor territory and taut techno – but a palpable alteration has occurred on the journey along the way.