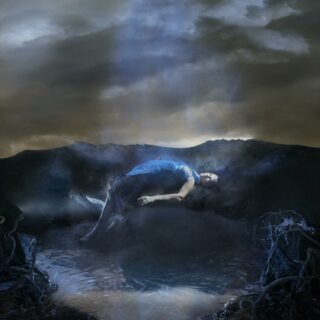 Italian electronic producer Caterina Barbieri draws on new and old approaches on her new release Spirit Exit, diving into the space between ecstasy and doom. For  the most part, the album was recorded and produced in her home studio amidst Milan’s pandemic lockdown in 2020. Spirit Exit is the first release on Barbieri’s new label Light-Years, which she had founded earlier this year. Weaving together voice, machine learning and fragments of classical guitar, on this album the Italian artist puts forth a new sonic language.

Spirit Exit feels like a peaceful chaos emanating from a vast portal of emptiness. Equal part blissful and mysterious, Barbieri’s arpeggiated synth passages narrate an abstract story that is both melancholic and charged with energy. It’s the outcome of an extended period of isolation, during which Barbieri has taken inspiration from philosopher Rosi Braidotti’s posthumanist theories, the metaphysical poems of Emily Dickinson, and 16th-century mystical text The Interior Castle by St. Teresa D’Avila.

Barbieri illuminates a newly-found corporeality in the perception-altering aural experience that is Spirit Exit. Through processed vocals that sound like an elegy on autotune, particularly on songs like ‘Canticle of Cryo’, this record paves the way for bigger, more atmospheric trajectories in Barbieri’s future work.

However, Barbieri’s processed vocals, guitars and synths are not the only elements that this record portrays for the first time. Spirit Exit breaks with Barbieri’s penchant for dense melody and rebuilds a new world with a repetitive drum pattern on ‘Terminal Clock’. Toying with distortion and arpeggios, ‘Terminal Clock’ sounds like it is unfolding beneath sharp lasers at an otherworldly club, before finally dissipating into the heavy ethereality of ‘The Landscape Listens’.