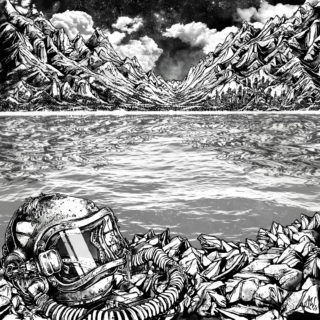 The thing that strikes you on encountering Cattle for the first time is the sheer, brute force of their music. There is a primal alchemy to the Leeds four-piece’s mix of dual-drums, bass, theremin and vocals which rarely drop beneath a larynx-shredding bellow. Live it is a thrillingly visceral experience, and the group’s debut LP ‘Nature’s Champion’ goes some way to capturing the heady broth of the band in full flow.

Each track offers a set of muscular grooves which don’t so much build as lope onwards towards the next section. It’s deceptively supple, yet thrilling and immediate. ‘Acrylic’ is lithe and danceable despite the unconventional time signature, a feat pulled off largely due to some dextrous bass playing from Tom Goodall; moody closer ‘Moon Crawl’ lurches from one side monitor to the other; the way ‘Found in a Tract of Land’ cycles through swung bass riffs and complex beat patterns is impressive without ever sounding ponderous.

If the drum work is brute in the corporeal sense then the performance of Chris Jacobs taps into the primordial soup of the subconscious. While there’s a ghost of Mark E Smith to his vocals, the wash of delay across each take drags them down from soapbox dispatcher into murkier depths. It brings to mind a man in a well bellowing up at the sky between gulps of stagnant water, and this ragged screeching augments the work of the rhythm section to drive home a nimble, invigorating record.