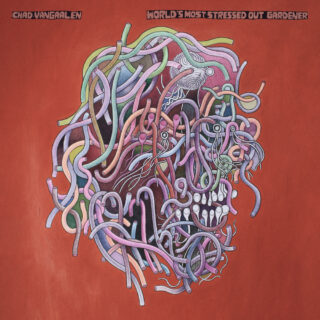 Chad VanGaalen has always struck me as a pretty chilled guy. With a career spanning a little over 15 years, his music has bridged the gap between breezy pop and studied introspection with a quirky, almost Adventure Time-esque sense of creativity.

This all came tumbling down when I read Sub Pop’s most recent bio for the Canadian singer. Instead of the laid back, self-assured VanGaalen who’d previously lived in my head, it painted the picture of some other guy – a frustrated perfectionist strung out in his home studio, overthinking every guitar twang, snare hit and tape hiss.

But, if the pandemic has taught the world anything, it’s that worrying about the future can be a mug’s game. In VanGaalen’s case, this realization has led to a new determination to capture the world as he met it, rather than creating worlds as he wants them to be. World’s Most Stressed Out Gardener is VanGaalen with the creative handbrake off – a tour de force of all the things that make the Canadian singer-songwriter great, from the kaleidoscopic psychedelia of ‘Starlight’ to the hazy, laid back pop of the single ‘Samuari Sword’.

The new carpe diem attitude has led to an album that tends to feel like an honest reflection of the singer’s internal monologue. “You’re stressed out all the time when you should be feeling well,” Vangaalen tells himself on ‘Nightmare Scenario’. At its best Gardener rolls back the layers to reveal a guy struggling to live in the moment but still finding his mind catastrophizing in some imagined future. As a person who spent the last year experiencing the exact same thing, it’s great to connect with someone else who’s spent the previous twelve months teetering between telling themselves that everything’s fine and a full-on existential crisis.

VanGaalen may not be the laid back guy I’d imagined him to be – but at least he’s trying to get there.