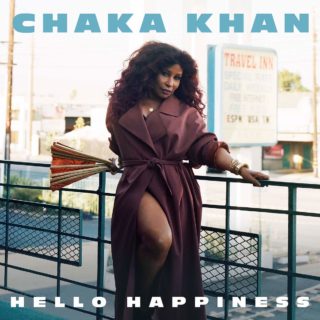 I’ll be honest: Chaka Khan’s back catalogue has rarely been a feature of my listening over the years, and after working with everyone from Miles Davis to Aretha Franklin in a career spanning 50 years and 22 albums, there hasn’t been a shortage of opportunity.

Sure, I might have sung ‘Ain’t Nobody’ badly at karaoke once, dipped into the Prince-spirited ‘I Feel For You’ as an occasional guilty pleasure, and had the hook of ‘I’m Every Woman’ burned into my brain after featuring on more adverts than I care to remember, but in the same way I have soft spots for Lionel Richie and Gloria Estefan due to my mum’s often questionable listening habits, I’ve always associated Chaka, Whitney et al. with long school holiday drives to France, six-changer CD players and subscriptions to the Britannia Music Club.

Away from the ‘Diary of Adrian Mole’-esque pre-amble, ‘Hello Happiness’ marks Khan’s first album in twelve years. And allied with Dave Taylor’s (Switch, Major Lazer) presence on the dials, throws up some twisted, contemporary jams.

Expectedly, Khan’s power vocal is the fulcrum of the album, but it’s given a dexterity by the all-angles-attack of Taylor’s production. Where ‘Don’t Cha Know’ is given a bright, soulful energy that could’ve happily been lifted from Romare’s ‘Love Songs: Part Two’, Khan plays it softer on the more minimalist ‘Ladylike’, easing into acoustic live lounge R&B before drifting into the dubby sound-system of ‘Isn’t that Enough?’.

Apparently, she had no plans to make another original record, and at just seven tracks, ‘Hello Happiness’ could have felt like a tentative return. Instead, the less-is-more approach feels measured, and while not every track is a bona fide hitter, it’s still an album that delivers highlights with little filler.

The disco, R&B and funk tropes that have hallmarked her career are apparent and ever-present, but the chopping key changes, bongos, bass licks and broken beats of lead single – and standout track – ‘Like Sugar’ puts everything into an energetic orbit of Khan’s vocal in a stop/start, cut ‘n’ paste style that made Max Sedgley’s ‘Happy’ such a fun listen.

But when Khan amps up the sass and swagger on title-track ‘Hello Happiness’ and ‘Too Hot’, you get a fiery glimpse of the diva dynamic on which she’s built a career and why, even at 65, and 23 albums, she doesn’t sound a step out of place.