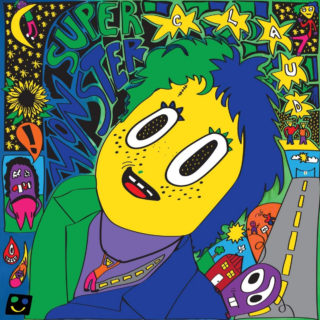 Claud keeps great company. Their debut LP Super Monster is the first release from Phoebe Bridgers’ Saddest Factory imprint, and features collaborations from dream pop princess Clairo (the pair are close friends), Unknown Mortal Orchestra’s Jake Portrait, and singer-songwriter Nick Hakim, among others. It was recorded in the fabled Electric Lady Studios, and named after an unreleased Daniel Johnston painting which the studio manager showed them after seeing its title, ‘Claud & The Super Monster’. Yet despite the rather rarefied environment in which it was made, the best thing about Super Monster is how relatable it is.

At just 21, Claud’s ability to distill the emotional tumult of young adulthood into song is reminiscent of Lorde, Frankie Cosmos, or Bridgers herself – albeit in a much more upbeat format. They capture earnestly and incisively those formative experiences of fleeting romance, unrequited crushes, long summer nights, and leaving your hometown for the big city. It’s easy to imagine Claud’s music soundtracking these experiences for plenty of others too. Their pastel-hued indie pop is ultimate Spotify algorithm fodder, and their warm social media presence and candid discourse on gender identity (they are non-binary) has led to a growing fanbase of fellow Gen Z-ers. With their sunny, bouncy chorus lines, tracks like ‘Gold’, and ‘Cuff Your Jeans’ are a TikTok trend waiting to happen, especially given Claud’s popularity on the app. Don’t be put off, though, if you have more grey hairs than TikTok followers (join the club). On Super Monster’s highlights – the lightly shoegaze-y ‘Soft Spot’, the R&B tinged ‘In and In Between’ or the incessantly catchy ‘Guard Down’ for example – Claud’s talent, like that of any great pop star, lies in their ability to put you in their shoes, and make you feel exactly what they’re feeling.