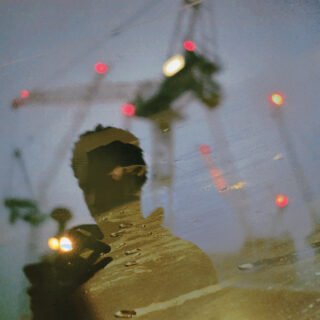 Coby Sey might be familiar as a crucial collaborator to Mica Levi and Tirzah, but his full-length debut reveals an entirely singular character. Conduit is a sonic outlier that sits on the fringes of grime, dub and jazz, wherein darkness and claustrophobia are often placed alongside moments of transcendence by a wunderkind producer. It is a bold contortion of its constituent parts, diverse and fresh from the very first confrontational vocal loop to the album’s piano-laden anti-ending.

Sey’s vocals – free-flowing passages of spoken word – guide his compositions, but the focus here is very much on the textural passages that envelop them. An imperious producer, the Lewisham native has constructed eight singular passages across the record, ranging from deconstructed grime and nocturnal ambient cityscapes to sprawling eldritch jazz. ‘Night Ride’ is a bioluminescent adventure in dub-techno, all TV static and 404 error codes, whilst opener ‘Etym’ begins with brazen bars – isolated vocals – before Sey’s voice is engulfed by a technicolour wall of glitching sound.

The best moment comes on ‘Response’, a ten-minute sprawl at the back end of the album. The unheimlich squalls of maltreated saxophones create an atmosphere of eeriness, which only builds as reverb-laden beats and distant strings bleed into the fray. “Active… active… ACTIVE,” Sey growls at the track’s peak, which is like Twin Peaks S3E8 made audio. This darkness, however, is quickly alleviated by the next track, misty-eyed closer ‘Eve (Anwummerɛ)’, a sparse, infinite piano meditation, coloured with the calming sensations of rainfall. Perhaps, these two pieces are ‘Conduit’ in microcosm – claustrophobia bubbles away throughout, but beauty and transcendence is never far away.