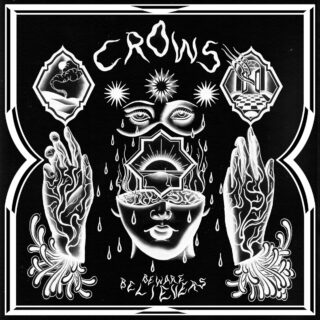 Brexit. Pandemic. And now the brink of WW3. For once, talk of anyone returning with a “difficult second album” is almost justified with a backdrop of that near-apocalyptic triptych, but in the interest of quickly moving away from a very tired cliche, Crows’ return is a hardened one, and Beware Believers is a triumph of patience, perseverance and (rightly) being pissed off.

Hitting on Brexit angst (‘Garden of England’), the grind of big city life (‘Slowly Separate’) and the blood-boiling conduct of the DWP (‘Closer Still’), they haven’t had to look too far from home for a nemesis, and that gnawing discontent powers the sound of a band with their backs up, snarling at all of the political bullshit with a brooding glare, and damning it all with a juggernaut momentum that builds from the first heated chords.

In a breathless opening triple opener, ‘Closer Still’ punches in quickly with shouty agitation, ‘Garden of England’ is a 100mph blitz of chugging guitar and feral riffs, and ‘Only Time’ kicks in at a slingshot pace and never lets up. It takes ‘Slowly Separate’ 20 whole seconds to truly detonate, but when it does, you can feel the fist-clenched frustration build and release in the searing guitar bursts and vocalist James Cox’s barked aggravation. ‘Healing’ hits a little a darker with an intense, austere post-punk energy, Cox pleading, “I know that everything hurts / But I know everything can heal” before the raucously excellent ‘Room 156’ somehow ends up sounding like The Stills, Interpol, and early Desert Sessions-era QOTSA all at once.

In a dramatic change of pace, the lurching heft of ‘Sad Lad’ closes out the album with Cox’s vocal booming through dense guitar fog, all thick and syrupy against dramatic, hissing static dissonance. After all the intensity and grievance that preceded, it’s both a grand and almost calming finale to an album that’s a brutally satisfying two fingers up to everything.