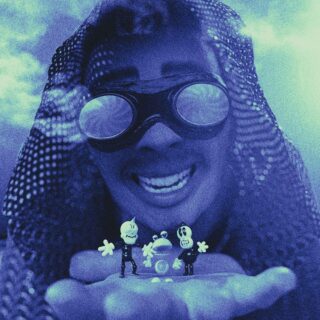 Cuco’s twinkling synth melodies wrap you up in his simulation pop. Combining elements of psychedelia and indie rock with influences from his Latinx heritage, Fantasy Gateway feels like stepping into a brave new world. Cuco is disconnecting himself from his reality and this dreamy, bass propelled record lets us see what is behind his closed eyes.

It’s almost impossible to not draw comparisons with those who are currently causing a shift in the pop landscape. For example, there’s a Tyler, the Creator cheekiness woven into ‘Caution’, its playfulness echoing Flower Boy. Dealing with a heavy heart and a full head, Cuco details what it’s like to keep his thoughts to himself. Deciding not to bombard his peers with his worries, he separates himself from his present.

Time flits before him on ‘Aura’. The filtered drums carry a Tame Impala airiness, but the addition of trumpets add a distinctly Cuco flavour to the outro. The psychedelic atmosphere continues on ‘Paraphonic’. “I won’t be surprised when it comes crashing down, i’ll just close my eyes,” Cuco sings as he surrenders once again to a dreamland. He makes the end of the world extremely romantic on ‘Fin Del Mundo’. The live acoustic guitar glitters on the record as one of the rare appearances of a live instrument.

His collaborations on the album speak to the scope that Cuco is covering. See Kacey Musgraves and Adriel Favela’s feature on ‘Sitting in the Corner’: marrying country pop with a flamenco melody, the harmonies are heavenly and Favela’s vocals take you to cloud nine. This feels like another form of escape on the record, as we’re transported from one genre to another. Cuco covers a lot of ground as he leaves his present behind but doesn’t stray too far from reality with the varied and fun Fantasy Gateway.