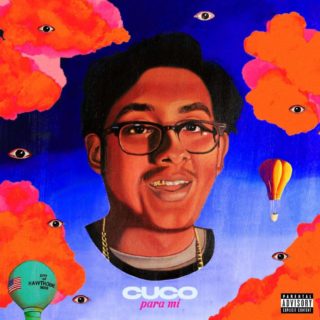 Omar Banos is very online ™. Part of a new wave of DIY bedroom musicians, he’s a self-taught Chicano producer, singer and song-writer that has reached millions of streams and viral fame with his catchy, lo-fi beats and irreverent attitude. Singing in a mash-up of Spanish and English (“Spanglish”) his music feels intimate and honest, yet never takes itself too seriously.

In a genre that’s marked by poe-faced, unfalteringly serious acts like Beach House, he sets himself apart with an off-kilter humour. It’s not a stretch to compare him to the Beastie Boys at times, particularly on the self-deprecating and surreal monologue that opens the album, or on the overblown synths of instrumental ‘Perihelion (interlude)’. Additionally, he stands out from his dream pop peers due to his varied sonic palette, playing with guitar, horns, syncopated rhythms and space-age sounds.

Anyone who’s familiar with Cuco knows that he’s very much a musician for our times, and this debut album only evidences this further. Candid discussions of drug experimentation (‘Keeping Tabs’) sit alongside moments of introspection (‘Hydrocone’) in a way that captures the “no filter” nature of social media, Snapchat and IG live. Thematically, too, it feels particularly relevant, especially on ‘Bossa No Sé’, which, at a time when masculinity is being reconsidered by society at large, plays with a wounded male ego torn between love and hurt, as Cuco sings, “You broke my heart/ but I’m also so obsessed with you”.