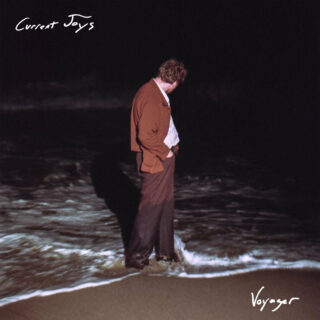 You know that joke about sitting passenger in a car and pretending you’re in a music video? Everyone’s always chasing that perfect soundtrack – or is that just me? May I humbly present Voyager for your consideration? Pop in some earbuds, hop on the train and take this album out for a spin around the block. Nick Rattigan’s seventh album under the name Current Joys is like a sigh of relief for former indie kids who just want something emotional to play behind the petty, pedestrian drama of our lives.

This album has many really great tracks, including the soaring ‘American Honey’, heartbreaking ‘Rebecca’, sturdy, heartland-y ‘Shivers’ and energetic ‘Money Making Machine’. Some of these tracks, especially ‘Shivers’ and ‘Rebecca’ are slightly reminiscent of Conor Oberst’s work – maybe there’s just something special about melancholy singer-songwriters from USA states that start with N? If you’re like me, you’re looking for songs to shake the numbness out of your limbs and poke your heart alive, and Rattigan’s whispery vocals and thoughtful melodies are a perfect choice. These songs aren’t about feeling happy, but remembering how to feel at all, even if defrosting means waking to a case of teeth-chattering shivering. This album sounds like what the soundtrack to Nick and Norah’s Infinite Playlist would sound like if an edgy, depressed college student compiled the songs. I mean that in the best way: I was once an edgy, depressed college student.

The only bad thing about this album is that a few songs that slip through the mind without making much of an impression, filling in the tracks between memorable counterparts. The album may have been better served if it was trimmed down by a few tracks, but overall Current Joys are definitely worthy of being added to your go-to rotation.