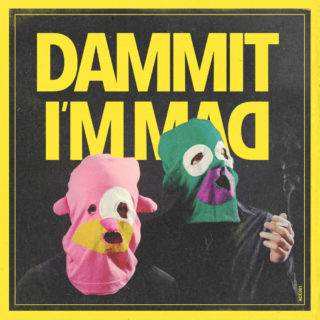 During its heyday, math rock’s major saving grace from patricianly classicism was its overarching sense of humour. It goes something like this: our name may be something daft like, say, You Slut! or This Town Needs Guns, but aren’t these tunes jolly clever?! It’s enough to make you pine for American Football’s overshared heartbreak, but is there still something stimulating about a group doing their best to surprise with left-field chord changes and deconstructed time signatures in 2018? Dammit I’m Mad think so, managing to thrill with their debut like it’s 2007.

But unlike the slew of copycat acts after the genre’s height, the Scandi duo are no bullshit technicians. While tunes veer from shimmering arpeggios to gross dissonance, there’s enough textural variety in the production of ‘Atomic Spectroscropy’ to sustain interest beyond their agile skill. Most of all, they recall the wild art rock of Deerhoof, only Dammit I’m Mad let the instruments do all the talking. Even when the gimmick wears thin – and it eventually does within each song – the playful to-and-fro is still infectious nonetheless. Also, an uncredited spoken audio sample on ‘Space Machine (or whatever)’ sounds like Prefab Sprout’s Paddy McAloon, and you know that can’t be a bad thing.