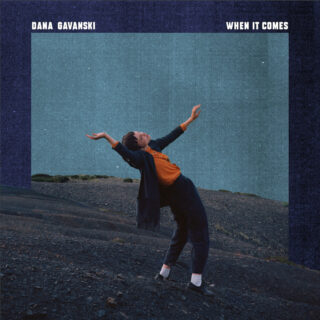 With the release of her debut album marred by the peak of the pandemic and the subsequent impossibility to take it on tour, Dana Gavanski could have surrendered to the ill-fated circumstance. Instead, the Canadian-Serbian singer-songwriter put the best resilient approach to use and spent the months making new music: the covers EP “Wind Songs” first, and her sophomore album When it Comes, while her healing ‘lost’ vocal cords. It’s a process that led the musician to shift her focus from her fingers – she writes on a toy Casiotone – to her voice.

“In many ways, this record feels like it is my first,” Dana says. “When I could use my voice, I had to focus so there is an urgency and greater emotional trajectory than before… it’s very connected to vocal presence, which extended into an existential questioning of my connection to music. It felt like a battle at times, which I frequently lost.”

This shift that led to a more mature sound from the previous straightforward pop; a jump into a dreamy, ethereal soundscape accompanied by piano, keys, and Moogs, but always keeping the vocals on the foreground, using her singing as another instrument. Thus, the melodies are dilated and soft, almost like lullabies for grown-ups. Despite the many lockdowns, the album was started in Montreal, ended in Belgrade, and recorded back in London, a journey that allowed Gavanski to reflect on memory and openness, accepting and fully embracing what came and what’s next in life. The album also sees her expand into fiction, as on ‘Lisa’, using adopting the perspective of the sea to meditate on the relationship between humans and nature. With When it Comes, Dana Gavanski is no doubt finding her place among the most promising singer-songwriters around.