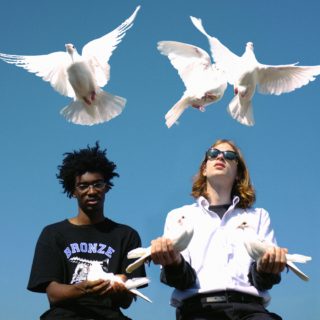 Atlanta’s Danger Incorporated released their ‘WORLD WIDE WEB’ EP last Halloween, as if the soured, analogue beats didn’t already scream spooky mischief. It took the hedonistic rap of Yung Lean and the Weeknd and torched the ugliest parts. Their Awful Records debut hones these messy bangers into something more distinct, with churning choruses and fuller production. Louis Duffelbags sings in a twisted barbershop croon, every multi-tracked vocal screaming for your attention; Boothlord’s bars are gruff and decaying, more for jolts of energy than for lyrics, which are knowingly shallow, dealing in disconnection and intoxication.

Some call them the sound of the future, but frankly, they’re the sound of the past five years. The darkest sides of trap and cloudrap are soaked into every beat, and at points it becomes hard to draw feeling from these familiar sadboy mantras. ‘Birds Fly By Night’ crams a lot into 22 minutes though. It’s at its best when threatening to crumble, like on the vocal climax on ‘Downtown’, or Booths’ rabid verse on ‘Packed My Bag’. They’ll do well at house parties and graveyards.