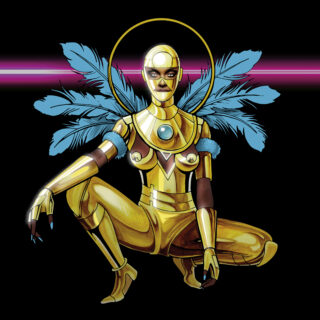 It would be fair to say that when Dawn Richard was first making waves with the reality show girl group Danity Kane and then as part of Diddy Dirty Money, a solo career at the vanguard of contemporary electronic music didn’t look likely.

Choosing the path less trodden, she has been self-releasing her own records for nearly a decade, quietly amassing a reputation for tasteful, trend-aware compositions that sit comfortably at the intersection between deviant club music and slinky R&B.

This album’s stated aim is to pay tribute to the Black female pioneers of electronic music, and although the concept never truly comes into clear focus, Richard offers detectable flavours of footwork, bounce, trap and drill. Singles like ‘Boomerang’ and ‘Bussifame’ find Richard at the top of her game. She’s not challenging the listener à la Jlin or early FKA twigs, doing the kind of thing that can take years to make sense of, but instead is firmly in the pocket of today, with the alacrity and fleet-footedness to skip between the key components of today’s musical landscape with gymnastic poise.

There is a vaguely-defined story woven throughout Second Line, revolving around Richard’s alter ego, King Creole, but despite the record’s considerable runtime it lacks narrative progression. It is also front-loaded with its best material in a way that is somewhat outdated and quite unhelpful to any sense of holistic purpose to the album’s message. But in more easily digestible amounts, Second Line contains evidence aplenty that Dawn Richard understands her world better than most.