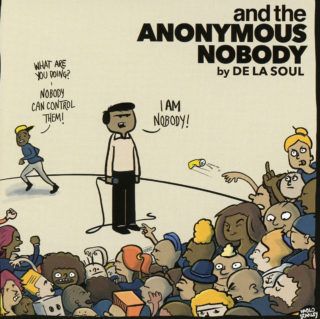 It’s been eleven years since we last heard from De La Soul and, with new album ‘And The Anonymous Nobody’ coming as the product of a $600,000 kickstarter (the second highest amount the platform has seen), it’s fair to say that fans have a vested interest. With anticipation high then, the preachy, string accompanied opener courtesy of Jill Scott particularly drags until proceedings kick off – sample free and newly primed for hip hop in 2016.

While favouring a new jazz-inflected sound, at its best the record recalls the laid back beats of ‘Stakes is High’ and the lyrical wit and off the wall humour of ‘3 Feet High’ (see ‘You Go Dave’ in particular). With cameos a-plenty though, it’s almost inevitably hit and miss. Snoop helps deliver an old school anthem with ‘Pain’, Estelle and Pete Rock an RnB hit with ‘Memory of’ and Little Dragon an intriguing, classically driven oddity in ‘Drawn’. All are high points, but elsewhere the disjointed David Byrne daydream and cringe-worthy Justin Hawkins appearance are better off avoided.