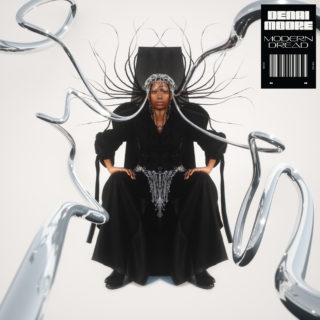 It’s not hard to figure out why Denai Moore named her latest album Modern Dread. One look at the news and social media reveals it’s the overriding emotion that’s dragging us through 2020. With the help of Everything Everything’s Alex Robertshaw, Moore has captured the detached reality of modern life in that chameleonic style she’s long been describing herself as having.

Elsewhere and We Used To Bloom showed signs of the “genre-less” feel she wanted to capture, but it’s only now that it really becomes apparent. The skittering beats of ‘Motherless Child’ sit side by side with the drumline intensity of ‘To The Brink’, while ‘Grapefruit’ has all the scratchy yet surprisingly lush genre fluidity of Jai Paul’s mysterious output.

It certainly helps that Moore knows when to give it her all and when to pull back. ‘Cascades’ has a chorus that seems built to be belted out but, by taking a step back, it brings introspection to the track. There’s a deeper sadness when she sings, “Am I convincing you yet? / Got my stoic faces to get”. ‘Turn Off The Radio’, meanwhile, is Moore going all-out. In the midst of a ‘90s electro synth line, and as backing vocals emit a long, sweeping sigh, Moore pours every emotion out in a cathartic frustration. There is perhaps a want for more of this fire, but the slower pace suits the glacial synths that fill the album for the most part.

Modern Dread’s misstep comes when things start to feel a little rote. ‘Fake Sorry’, with its “fuck the haters” feel and a vocal break, seems built for the express purpose of inducing a mass singalong at a festival. It’s a stark contrast to the rest of the album, seeming manufactured in its emotions rather than staggering and heartfelt. Thankfully, it’s one amongst many.

With album closer ‘Wishing You Better’, Modern Dread just ends. No fade out. No comfortable closure. Because that’s not what life is. It continues and we have to find our way through the future with all this new knowledge we have. Modern Dread doesn’t lay out the pathway ahead, nor dare to assume the path left behind. But, by showing the universality of this dread, Denai Moore has provided us with some kind of comfort.