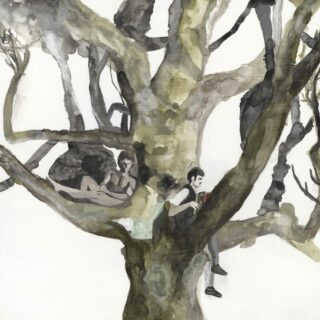 Over nearly thirty years, Destroyer have carved out a singular niche. Able to transform seemingly at will, Dan Bejar is unique as a frontman in modern rock – if you can even call what Destroyer do ‘rock’ anymore.

Labyrinthitis, Destroyer’s 13th album, dances between ’80s-evoking anthems, moments of almost baroque jauntiness and near post-rock epics. Throughout, Bejar’s lyrics are as cryptic and literary as we’ve come to expect, filled with evocative oddball imagery like “Ruff ruff says the beetle to the terrier”, and lines that balance grandeur and self-awareness such as “An explosion is worth a hundred million words / But that is maybe too many words to say.” The whole album has the quality of a medieval bard whispering secrets to you that it will take years to truly understand.

Across the album, there’s far more groove than recent offerings from Destroyer, disco-tinged drums marching under Bejar impish incantations, particularly on the second half of the record. Where early tracks ‘Suffer’ and ‘June’ are dense and anxious, restless in their rhythms, ‘Eat the Wine, Drink the Bread’ is funky and salacious, and ‘It Takes A Thief’ is a moment of percussive brightness. All told, Labyrinthitis is at once freewheeling and tightly wound, packed with grooves but often too anxious to settle into them for more than a minute at a time.