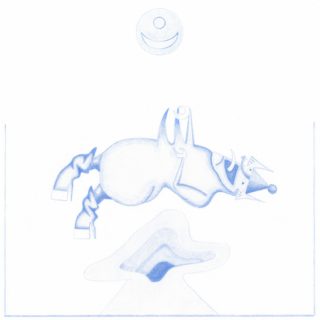 During the 12 years of his career to date, Devendra Banhart has kept on changing without ever really changing. From the long-haired black-eye-make-up hippie of the early years, to the sleek boho artist he is now, the 35-year-old musician has continued to refine his style and songwriting, without making a radical change to his art and music. Therefore it’s unsurprising that this, his ninth album, starts directly from where its predecessor ‘Mala’ (2013) left off.

Here, Banhart is apparently cruising through all the different steps of heartbreak: the first side of the album delves into the desperate search for a new love interest, like the opener ‘Middle Names’, a sweet ballad recalling a casual encounter with a past significant other.

‘Fancy Man’, meanwhile, is a typical Banhart track, with its folk sound, psych shades and cadence of words. ‘Fig in Leather’ is an interesting funky divertissement that’s somewhere closer to William Onyeabor than to James Brown. ‘Theme for a Taiwanese Woman in Lime Green’ takes dip into Brazilian tropicalism.

The mood changes drastically on the other side of the LP. Opening with the space-age rarefied synths of ‘Mourner’s Dance’ and ‘Saturday Night’, the second part is a trip in the misery of the end of a relationship, whatever its nature.

A lonely, strumming guitar fades into silence on ‘Linda’, the slowest, deepest track on the album. It’s the story of an abandoned lover finding some sleep at last only to be awoken after a few minutes by the endless stream of their thoughts. Unchanged, unscathed.