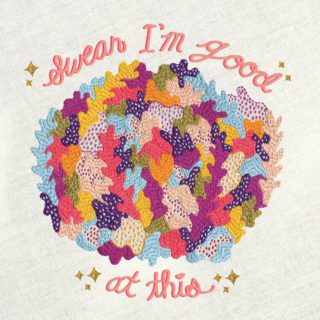 When are you too old to appreciate music that’s aimed at the young and disheartened? Diet Cig’s brand of bratty and vulnerable pop punk is an honest portrayal of the grievances of being in your late teens, the frustrations of which being something we can all relate to. Their tenacity for blending cutting and candid lyrics with gutsy, primitive punk is a facet that is deceivingly easy to get wrong, however. ‘I Swear I’m Good At This’ runs the risk of sounding whiny and formulaic, but it’s singer and guitarist Alex Luciano’s defiance and acerbic, lyrical wit that makes Diet Cig disparate to their contemporaries, and, ultimately, wiser beyond their years.

The powerful pop melodies of the likes of ‘Pool Boyz’ that made 2015’s ‘Over Easy’ EP so addictive are all-too-often amiss here, although glimmers of that can be heard on ‘Maid of the Mist’ – a track which serves as a potent message about body image and consent and a “fuck you” to those who dare to argue. Largely, ‘I Swear I’m Good At This’ is a bold debut that triumphs in its brave and confrontational lyricism.