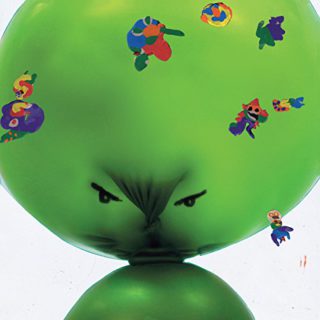 On ‘Moody Balloon Baby’ we meet Dog Chocolate at a crossroads in their career; the London art-punk quartet have seemingly refined and perfected the sound that they’ve been polishing over the last few years on albums like ‘Or’ and ‘Snack Fans’. This 24-minute blast of youth and angst is certainly fully formed – all scratchy Fugazian guitars, razor tight percussion and call and response vocals – but ultimately it comes across as too consciously weird and too on-the-nose.

It’s the lyrics that make this album feel more smug than charming. “Making waste that needs reducing / We’re the only things that cause pollution”, Andrew Kerr bellows on ‘Gone Viral’, atop seering guitars that sound like some kind of cross between hardcore ’80s punk and landfill indie. Often the band’s lyrics invoke a wry smile, but too often it feels as though the group aren’t as funny as they think they are.

‘Moody Balloon Baby’ is admittedly fun, and in small doses Dog Chocolate’s feral bubblegum punk is likeable. With this album, it’s a case of using each song as a catapult to launch fecal matter at the wall, with only some ideas and motifs sticking. Definitely a talented bunch, Dog Chocolate could be a great group when they sound a little bit like giddy children at the height of a sugar rush.