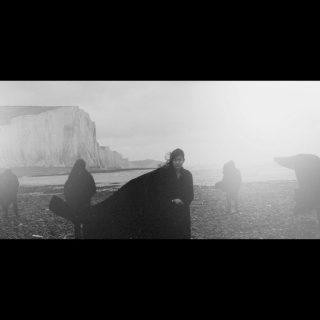 Helen Ganya Brown, aka Dog In The Snow, wrote the songs on ‘Vanishing Lands’ after a period of strange monochrome dreams. They were then lent flashes of colour, which rarely extend beyond muted purples, by co-producer Rob Flynn.

Exploring a “ruined world” scenario, the Brighton based musician links the tracks on her second album through repeated phrases. This layering of references to “harsh light, obscura” and “nightmare empires” create a claustrophobic, liminal space even before she starkly gasps, ‘I’m sick of fearing everything’.

The dread shifts and ebbs across the ten tracks and although the grip never loosens, partial relief is provided in sonic variation. The release opens with a clutch of songs that turn up the darkness within Self Esteem’s electronic-pop, the sickness on ‘Dual Terror’ infecting background vocals that are being squeezed out of an air tunnel.

The sense of unease is often amorphous, although ‘Fall Empire’ opens with an environmental warning from experimental documentary Koyaanisqatsi. Elsewhere it’s created through musical motifs: the low-slung guitars of early New Order on ‘Icaria’, and the spacious, desolate atmospherics of the Cocteau Twins on ‘This Only City’.

It closes with ‘Dark’, on which the ascending notes suggest a final parting of the black clouds.

Dog In The Snow