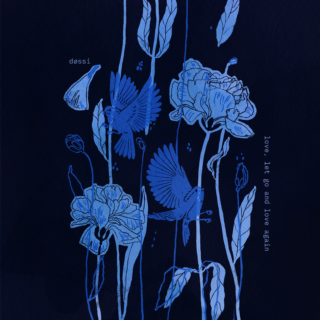 Love, Let Go and Love Again, the debut album from Norwegian newcomer DØSSI, uses textural production to flesh out well-written, tender pop songs, often otherwise simply arranged on guitar or piano. She compares her songs to birds, and you can hear the flap of their wings and scratch of claws in many of the album’s pastoral samples.

Eschewing the dominant synths of the day, DØSSI favours pop culture references as shortcuts to contemporary relevance (‘Tough Love’ namechecks Taylor Swift and cribs from Billie Eilish’s ‘Ocean Eyes’; ‘Jasmine, Darling’ paraphrases Kate Winslet in Titanic). Coupled with acoustic guitars, glitchy backing vocals and amniotic beats, the effect is reminiscent of The 1975’s latest effort, in its emptying out of their self-effacing wit in favour of earnest emotional interrogation.

Ostensibly two EP halves written as a whole album, the first examines love, while the second covers moving on. In reality, the thematic distinction is unclear, seemingly more a marketing strategy than a creative decision. The project’s Necessary Singles stick out for the same reason: ‘Art of Letting Go’, recorded with Sigrid producer Odd Martin, feels heavy-handed when stacked next to standouts ‘How It Ended’ and ‘Standstill’. Their brief, meandering nature is gleefully free from a mandated chorus. The dePresno feature on ‘Wildflower’ is a rare case when business choices pay off.

Ultimately a little lengthy, Love, Let Go and Love Again could benefit from ditching the pretence of an album and standing as two separate projects, but its unique textures and proficient performance ensure DØSSI’s birdsong mostly takes flight.