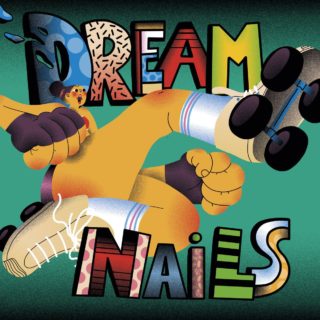 London-based band Dream Nails describe themselves as queer, feminist “punk witches” who write “hexes not songs”. It’s true that their output does often seem to transcend the musical, and the group’s self titled debut album is almost closer to a zine, or a sketch show than a traditional LP. A lot of this is down to the inclusion of ‘skits’, 10-30 second interludes between songs, incorporating chants, affirmations and news segments; which could feel gimmicky but instead give context and depth to the rest of the album, and the moment it exists in. Dream Nails are a feminist band in the tradition of Riot Grrl, in the sense that feminism forms the band’s raison d’etre, and for the most part, their subject matter. But the landscape has changed dramatically since the early days of Bikini Kill. Intersectionality is an essential part of feminism in 2020, and Dream Nails are well aware of this, creating spaces both virtually and physically which include people of all orientations and gender identities.

The ‘Women and Non-Binary People to the Front’ skit offers a taster of what a Dream Nails gig entails: “Women and non-binary people to the front!” singer Janey Starling shouts into the mic. “The next song is called Vagina Police, but we want to make clear we stand in solidarity with all our trans siblings. We believe in reproductive justice, not all fucking women have vaginas.” Elsewhere, they take on homophobes who watch lesbian porn (on ‘Kiss My Fist’), and capitalist culture (on ‘Corporate Realness’). The tracks are short, mostly running under two minutes – punchy pop-punk with plenty of anthemic rallying cries. There are lighter moments too, like recent single ‘Text Me Back (Chirpse Degree Burns)’ which laments digital dating culture, or ‘Jillian’, a sapphic ode to celebrity fitness instructor Jillian Michaels. It’s by no means a subtle record, but Dream Nails are having a lot of fun, and everyone’s invited to the party.