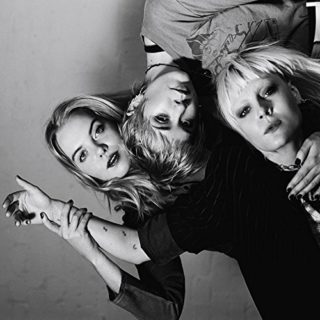 Dream Wife, the British/Icelandic trio of fire signs best known for their tribalistic brand of smirking guitar pop, have finally released their eponymous debut album. Marrying Courtney Love’s gritty, bittersweet vocal stylings with a touch of Kathleen Hanna’s energy, this record is a brimming riot of the expectedly unexpected. Vicious (and I’m particularly talking about when, with banshee-like venom, they repeat, ‘gonna fuck you up, gonna cut you up,’ in ‘F.U.U.’) and nonchalant in equal measure, ‘Dream Wife’ offers, as its name might suggest, a cutting critique of patriarchal society and its objectification of women.

Nowhere is this made clearer than on ‘Somebody,’ in which lead singer Rakel Mjöll adamantly insists, ‘I am not my body, I am somebody.’ Here, the band do a pretty good job of implementing the art of story-telling without sacrificing the primal energy and wild, fuzzy guitar lines that embodies their sharpened signature sound. It’s an old sound, of course; tired even – but not as tired as the fact that young women still need to spread this message of equality.