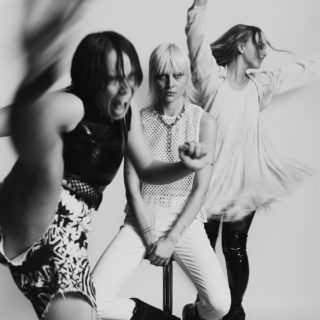 Dream Wife are “putting their money where their mouths are” – as they instruct on ‘Sports!’ – and supporting women in the industry. At a time when 95% of people in music production are male, the London-based trio have chosen to work with producer and mixer Marta Salogni, engineer Grace Banks, and mastering engineer Heba Kadry.

Their decision to help other women and non-binary creatives develop their careers makes it all the more disappointing that their second album artistically stalls.

Their debut was somewhat serendipitous, the band emerging out of an art school project with a collection of garage rock and pop tracks. Filled with as many slogans as guitar riffs, it presented them as a girl gang that combined the fun of the Spice Girls with the empowerment of riot grrrl.

These qualities are in scant evidence on So When You Gonna…. It starts out promisingly enough, with the aforementioned ‘Sports!’, which demands “Fuck sorry / Fuck please!” before reeling off a list of sport clichés. The result is Le Tigre steeped in references to pop-art culture.

The title track is also a thoroughly enjoyable hangover from their 2018 debut, being a cheeky slice of Bikini Kill punk rock with a GIF-able “huh!”, while ‘RH RN’ is destined to become a live favourite. Taking its cue from Blondie, it revels in irony by at one point talking straight to camera (“You’re playing dumb”).

It’s this arched eyebrow that’s missing in much else of the material. Their attempt to develop their sound is a necessary part of the creative drive but it’s here they struggle to find a unique angle. The staccato delivery of Icelandic singer Rakel Mjöll remains distinctive but the likes of ‘Hasta La Vista’ and ‘Old Flame’ are much more conventional pop tracks, their new wave influence being smoothed into a sheen that can only dream of being as addictive as that of someone like The Go-Go’s.

There are still attempts to tackle feminist issues, with piano ballad ‘After The Rain’ addressing abortion and women’s rights (“This is my choice, my life”) and the spoken-sung ‘Validation’ being about identity, (“Nobody fits in”). They’re both vital subjects, but these songs lack the band’s previous power to incite and excite.

The band’s desire to change the world one slogan at a time is undimmed, but some listeners might want to know when they’re gonna… effectively evolve their musical style to match their ambition.