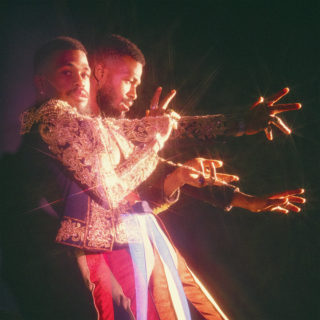 It’s hard to be relentlessly upbeat, but the Los Angeles based rapper-turned-bandleader Jared Lee, aka Duckwrth, offers nothing but good vibes on his new collection of party tracks. Lee has shown himself to be a jack-of-all-genres over a series of impressive tapes that whittle funk, house, hip-hop and R&B down into danceable pop songs. For the most part, the throughline has been his uplifting, sunny character. It was surprising, then, to see him tackle moodier songs and a punk-rap sensibility on last year’s Falling Man EP. The project was an interesting diversion that emphasised just how ambitiously restless Jared Lee is when it comes to defining his sound. But we could all use a little sunshine right now, and that’s exactly what his bombastic new effort SuperGood offers.

You get the sense that Lee is throwing every trick he has up his sleeve to make this album his breakout. These tunes are trendy without feeling overdone, innocently left-field and tastefully retro. The slinky production of ‘Quick’ and ‘Kiss You Right Now’ makes for a gloriously energised revision of the Timbaland-powered pop that made Justin Timberlake’s FutureSex/Lovesounds so appealing. ‘Superbounce’ with EARTHGANG is a wonderfully old school smoke-break anthem that feels purpose built for a Spotify chillout playlist. ‘Tuesday’ is the kind of club anthem that would have dominated the radio in 2005. Not many rappers are bold enough to get so unashamedly cheesy.

The album takes a workmanlike approach to pop songwriting, which can occasionally make it feel faceless and lacking in personality. Part of that has to do with Duckwrth’s rapping. His verses serve their purpose without standing out as memorable. It would be difficult to pick his vocal in a line-up, which isn’t helped by his chameleonic approach to performance.

Still, you’re going to come away from this album smiling. The bustling, electrogospel closer ‘Find A Way’ is the boldest on the whole project, with giddy voices tumbling over each other, taking turns with the melody. It showcases the collaborative spirit and strongmindness that’s gotten Duckwrth this far, and will surely take him even further.