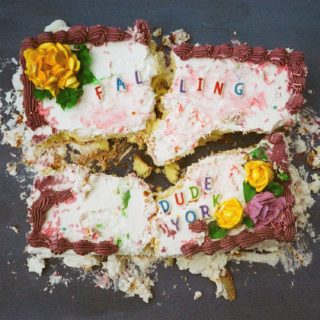 Some bright spark once crossed capitalism with the DIY punk scene and dreamed up these day-festival boat trips, where you could set sail around the Devon and Cornwall coast (what else is there to do?) while some great socialist-centric sounds hit you with the salt air. Bands would frantically play at you as their drum kits slide from one side of the hull to the other; the bassist becomes seasick; the guitarist stands on one leg mid-pedal manoeuvre and goes overboard. And then there was one.

Left to their own devices, the vocalist picks up a guitar and panics. The boat is turning 360 and all expectations of entertainment until we reach shore rests on them. It goes like this: they play the one riff they can remember from guitar lessons when they were eight – that was ‘Brimful of Asha’, but it ends up sounding a bit like a Wheatus d-side. Breaking into a sweat, it’s vocal-heavy Jimmy Eat World covers all the way home.

I’m not saying Dude York’s Falling sounds like this, but it’s not far off. There are so few female fronted pop-punk bands that the mission statement of opening up the gates of nostalgia and re-writing the sound of the 2000s is a good one. But more than half of the tracks are still fronted by guitarist Peter Richards; the rest are called things like ‘I’m The 1 4 U’, and would barely make it to the end credits of a Mary-Kate and Ashley film.