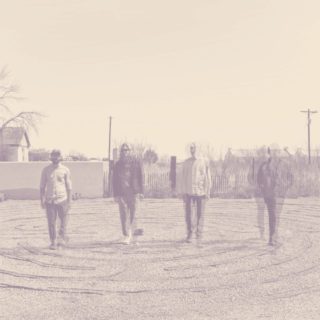 Sometimes records take on the characteristics of the place and circumstance of their making – it bleeds from every note and transports you as it plays. ‘MYTHS 003’ is such a record. Born from a residency at the Mexican Summer-hosted Marfa Myths Festival in Texas, it is imbued with the heat, light and space of the desert as the psychedelia of Stockholm’s Dungen and the indie-folk of Brooklyn’s Woods seamlessly blend.

Recorded in just a week, it hints at the deeper connection between the two artists, who bonded while touring together in 2009 and found the passage of time had done nothing to dull their mutual understanding of the other’s style. The seven tracks of mellow, trance-like beats and warbling soundscapes are unification rather than a lead-and-follow approach, even on the tracks contributed by each frontman rather than written in situ.

The shimmering fragility and retro lounge of Jeremy Earl’s ‘Turn Around’ and the liquid gold meditative chanting of Gustav Ejstes’ ‘Jag Ville Va Kvar’ form the collection’s peaks and remain true to each style while also giving space to the ensemble. And the rest of the album is no less special. From the percussive and star-speckled ‘Marfa Sunset’ to the re-energised and vocal-mirroring-melody of ‘Morning Myth’, to the funk spiralling beat and keys call of ‘Saint George’, each track is fully rounded and finessed, making this a beautiful record of gorgeous psychedelia-infused indie folk.