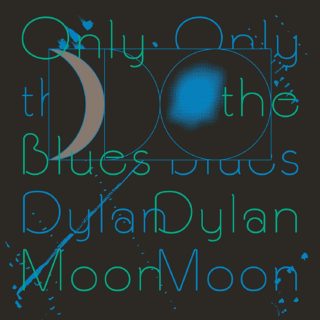 Dylan Moon bears the quintessence of his songwriting in his own name: his solid folk is, in fact, surrounded by a paraselenic, psychedelic halo – a mesmerising mist that muffles the pointy picking of his guitar’s open tuning, just like ice crystals refracting moonlight at night. Only the Blues, his debut album, is a collection of filmy songs spanning over 35 minutes with a delicate and intimate warmth and resonance, in both the words and the music. His deep voice is cloaked in a soft reverb centred in the space, enveloped by the instrumental base: it is a real, geometric environment that the listeners find themselves in while spinning the fourteen tracks. And it’s impossible not to think of Angelo De Augustine in the meantime.

We learn from the press release that “the album was recorded in Moon’s bedrooms in L.A. and Boston, small spaces made more claustrophobic by the soundproofing he hammered into the doors and the bedding he leaned against the walls”, which makes the relationship with De Augustine’s sound ever closer. But, opposite to De Augustine’s analogue lo-fi, Moon, who studied electronic productions, enriches his texture with electronic tidbits, discrete effects and electric guitars that galvanise the sonicscape. His tracks are short, often fading out, like quick thoughts getting lost in the haze. Sometimes they are dear memories; sometimes they’re disquieting speculations causing fuss in the mind. Only the Blues is a meteor shower of mental objects that it’s delightful to be in the orbit of.