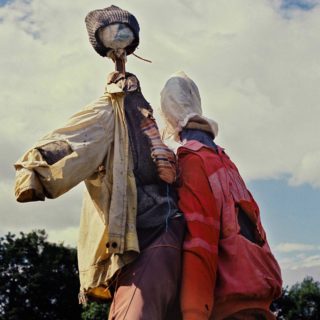 Eagulls’ 2014 debut album fizzled with the reckless urgency and potent vigour of youth. It was a record made by several young men being given their first platform to the world and then using it as a funnel for everything that came gushing and swelling to the surface.

It was a directed and skilful explosion bound by equal parts frustration and enthusiasm – a projection of anxieties through the power and speed of post-punk. Whilst the Leeds band have always raged hard and wanton in their output, though, they’ve also always been buttressed by a great melodic gift that has perhaps often gone overlooked, given their spunkier tendencies. There’s certainly no danger of that on ‘Ullages’ – 11 tracks of sweeping, opulent tunes that shimmer with such illustrious tones and harmonies there’s almost a blinding gleam that bounces from them.

It’s a big record, one with thick, heavily layered textures and massive, unapologetic guitar parts that are far from shy in displaying their origins. ‘Ullages’ is an album born from genre- and decade-defying bands such as The Smiths, The Cure and Cocteau Twins.

The definitively Johnny Marr guitar jangle that opens ‘Heads or Tails’ initially creates an uneasiness that this album could be more regurgitation than progression but thankfully any such anxieties are quashed as the album unfolds into its own cadences and creates its own melodic ingenuities. ‘Ullages’ is heavily in debt to predecessors but it manages to avoid tired pastiche, and instead takes a textural template most commonly explored in the 80s and melds it amongst its own more contemporary-leaning and increasingly unique palate.

Some of the song construction is really masterful, too. George Mitchell’s vocals have deepened and are more sung than shouted, and his ability to mirror the role of guitar lines in creating layers of melodies is a constant joy to be found on the record, no more so than on the surging ‘My Life in Rewind’.

The dual guitar work of Liam Matthews and Mark Goldsworthy is complimentary to the cause and they have created a sonic depth between them that creates an immersive depth akin to stepping into a cloud. As for bassist Tom Kelly, he’s moved from the juggernaut hammering assault approach of the band’s first record into a more soulful and dulcet tactic whilst the drumming of Henry Ruddel continues to veer between the manic and the restrained, understanding the power of a solitary thwack as much as a well placed rapid fill.

The musical advancement here is clear and whilst maturity is both a dirty and condescending word when misplaced, the expansive nature of ‘Ullages’ does feel to be directly in line with a slightly more aware and experienced group of musicians behind it. That said, whilst occasionally slower, denser, more considered and refocused, this is not an album lacking in bite or pace. ‘Lemontrees’ sparkles from the album and is a song that charges forward with a familiar (ahem) zest and menace.

Ultimately it’s one of the tracks that feels remarkably emblematic of the group as a whole, in being that one of the most defining and enjoyable aspects of Eagulls is that they move with an undeniable sense of British swagger, but thankfully it’s one free from the arrogance that normally accompanies it.