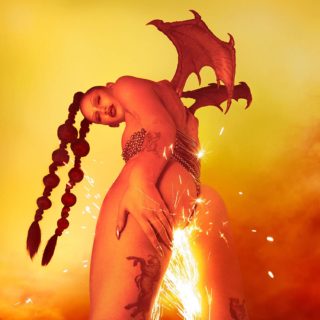 To title a record Phoenix suggests reinvention, but instead, this fourth full-length from Queens experimentalist Eartheater feels like a culmination of everything that’s led her to this point, both musically and spiritually. The record, which comes with the dramatic subtitle Flames Are Dew Upon My Skin, is scored through with echoes of Eartheater past. The icy electronics that defined 2015’s RIP Chrysalis are in evidence, especially on the glitchy, daring ‘Kiss of the Phoenix’, whilst the claustrophobic atmospherics of her last album, Irisiri, hang heavy also, particularly on the standout ‘Volcano’, which has her channeling long-time influence Kate Bush more directly than ever before.

Elsewhere, though, there are signs of new creative avenues opening themselves up – for all its eccentric accoutrements, ‘How to Fight’ is a stirring acoustic ballad at its heart, and the moody ‘Fantasy Collision’ takes a similarly stripped-back approach to the guitar. They allow Eartheater – real name Alexandra Drewchin – to present an emotional vulnerability that past albums had only ever hinted at, tantalisingly dangling the prospect of honest introspection before cloaking it in layers of reverb and effects. Phoenix, on the other hand, feels minimalist, perhaps thanks to the fact that it came together almost entirely over the course of a ten-week art retreat that Drewchin attended in Zaragoza.

Whether it’s on the anxious voice-and-effects exercise of ‘Mercurial Nerve’ or the towering alt-pop dramatics of ‘Goodbye Diamond’, Phoenix is a record that justifies its stylistic restlessness by remaining incisively personal from start to finish. If past Eartheater albums felt too chilly or obscure, then this bracingly open group of songs demands an overall reassessment.