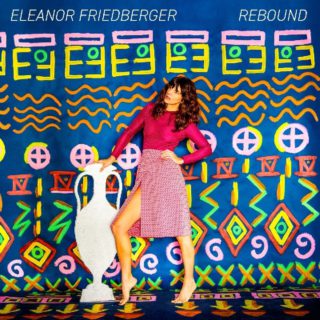 Eleanor Friedberger’s fourth solo album, ‘Rebound’, was informed by the time she spent in her ancestral Greece. The title refers to an ’80s goth disco she visited in Athens and its 10 tracks still carry the faintest whiff of dry ice and rinky-dink electronia.

It’s a marked change of musical direction for the American. Widely regarded as the stabilising force in The Fiery Furnaces, the melodically off-kilter duo she formed with brother Matthew in the early ’00s, she’s since gone on to carve out a solo career as a gently reflective ’70s influenced singer-songwriter.

Now she’s ditched the band with whom she recorded her most recent album and brought in programmed drums, a Juno synth and shimmery guitars. Mostly recorded on her own and with producer Clemens Knieper, it evidences a self-reliance that draws a breezy pop sheen out of the darker influences.

Never has she sounded as mainstream as on ‘The Letter’, which could be Camera Obscura walking like an Egyptian with The Bangles, and on ‘Make Me A Song’. A deceptively straightforward relationship lyric, the latter’s refrain of “I could love you more” actually refers to writing songs that urge the listener to “vibrate and resonate.”

It’s an indication of how, even at her most commercial, there’s a twist to her strongest work. The lazily played guitar at the end of the Ultravox-go-Velvet Underground ‘Nice To Be Nowhere’ is a case in point, as is the way ‘In Between Stars’ breaks down to just voice and tinny beat for the devastating line, “I don’t know how I’ve come to see the world exclusively through your eyes.”

The limitations of the programming do start to grate, with large sections of the album’s second half being forgettable. Nonetheless it’s an obtrusively pleasant stride into new territories.