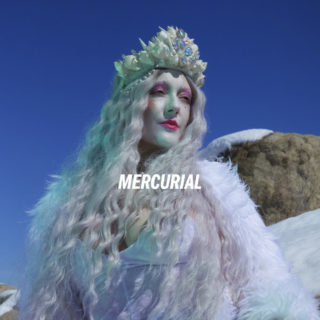 Self-styled ‘femme witch’ Elisabeth Elektra has become a well-known figure on the Glasgow music scene. The theatrical artist built up a following in her adopted hometown as Sargasso Sea and then Zyna Hel, before finally settling on her this name.

Despite the title changes the musician has been consistent in her creation of cosmic synth-pop. She’s now gathered the material together on her debut album, Mercurial, which features contributions from Julian Corrie (Franz Ferdinand) and Graeme Ronald (Remember Remember).

The ten tracks were written and recorded over three years as a cathartic response to grief and loss. Yet in focusing on the ‘light that emerges from darkness’, with lyrics loosely themed around rebirth and reincarnation, the tone is consistently euphoric even when there are occasional gothic undercurrents.

The material falls broadly into two categories: celestial bangers and atmospheric dreaminess. Belonging in the first are ‘My Sisters’, which sounds like Georgia-gone-new-age, ‘Inanna’, a disco-pop version of OMD, and ‘Crystalline’, a trance inspired number that’s like Grimes shopping for crystals with Empire Of The Sun (“you can’t break a cosmic tie”).

In the second bracket fall ‘Sadie’, which is constructed around a harp-like loop, and ‘My Armour’, which is all whooshing synths and bubbling percussion. These have the woodland wooziness of Goldfrapp at their most reflective, being inspired by dance music yet turning them into cosmic adventures that orbit around Elektra’s powerful vocals. Having the fleeting, siren-like quality of Kate Bush, she can persuasively carry the listener to a place where “we are all made of stardust.”

Drawing on synth-pop references from the ’80s while also looking to contemporary production techniques for inspiration, Mercurial captures the lightness and cosmic positivity that’s needed under current circumstances.