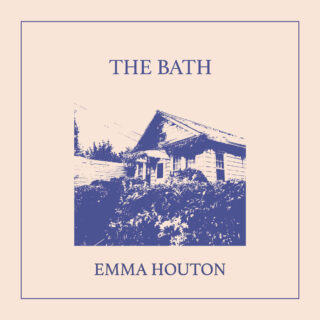 Clearly, if you had penned a hulking 100-page score for a choir of eight, and then gone to the trouble of assembling a group of vocalists, you’d be feeling pretty beat when Covid made the idea almost immediately impossible to execute. Instead, finding herself in this bind, the New York-raised, Irish-American vocalist, songwriter and composer Emma Houton got herself a loop pedal. Choir-less, and confined to her flat, she recorded all of the score’s vocal parts alone. The Bath, released via Trapped Animal, is the arrestingly blissful result.

Opening the album is a short, multitrack vocal arrangement ‘Candle for the Holy Ghost’. Using her loop pedal, Houton splits her mellifluous vocals into a multitude of Julianna Barwick-like repetitious layers. The reverb effect here, and across The Bath, is cavernous. There’s a sense of stillness to be found on the album’s purely ambient tracks, like ‘Gemini’ and ‘Going Home’. This is where the vocal soundscape can feel most captivating, a bit like sitting deep in a cathedral, immersed in a wall of seraphic sound from the in-house choir.

Elsewhere on The Bath, Houton employs a patchwork of lyrics from traditional Irish folk ballads over the album’s choral loop. In the album’s centrepiece, ‘Bow and Balance’, two sisters meet a gnarly end in an arrangement of the Irish folk ballad ‘The Twa Sisters’. Whilst in ‘Watershed’, ‘Idumea’, and ‘Waiting’, there’s a thread of Houton’s Methodist grounding running through, as she muses on purification, drowning and not being enough. There’s a slightly intense tendency to dwell on the darkness in Houton’s lines in a way that, after this past year, can begin to feel a bit jarring. It’s the expert, intricate arrangement of the layers and layers of vocals on this debut album from Emma Houton that linger, and take hold.