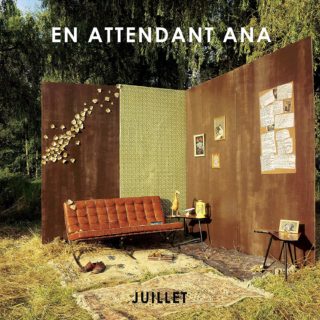 Parisian quartet En Attendant Ana return with their second LP, a record that marries garage grunge with intelligent, melodic songwriting. Julliet is gutsy, determined, unpredictable; held together by the crystal clear vocals of Margaux Bouchaudon, which cut through the fuzzy backing with an effortless elegance.

Julliet was created in isolation, recorded over a single week in a studio in rural France; yet when it came to inspiration for the writing they cast a wide net, citing Cate Le Bon, Electrelane and Stereolab as influences. Named for the month of July, the record is alive with a sense of excitement and transition of the changing season – as the band surmise, “a symbol of the end of something and the beginning of another one.”

Opener ‘Down The Hill’ is instantly grandiose, with the introduction of trumpets seconds into the record, as well as a four-bar motif that will recur throughout the track. Repetition is a central writing style on the record – be it of riffs or vocal ideas – which is at times extremely catchy, at others a little formulaic.

Nippy drums and driving base sustain through the first four tracks like a pulse, until ‘From My Bruise To An Island’ arrives midway through the record, casting a spell of its own. Beginning with a sparse soundscape and almost choral vocal melody, it builds to a swirling, brass-driven climax, before fading away to welcome back the solo voice. The record’s highlight arrives with ‘In / Out’, a dream-pop earworm imbued with such a carefree optimism that it is difficult not to nod along to.