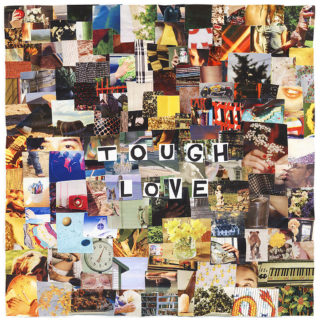 Queer commentary accelerated through potent folk expression and blaring punk rock capabilities, LA musician Erin Anne is no stranger to wrestling with her own identity. Having initially self-released this lo-fi, bedroom-crafted debut back in June 2019, she’s since landed a deal with Carpark Records and is digitally reissuing Tough Love with a few rounded tweaks and analogue synth renovations.

Retaining its rugged, uneven exterior, Tough Love is exploratory of Anne’s multifaceted persona as she contends with the uphill struggle of finding acceptance and becoming the truest version of herself. Frustrated by her own unapologetic masculinity, Tough Love tries to make sense of her many masks. Even when subdued, Anne’s frank, confessional lyrics are razor sharp, propping up explosive arrangements and occasionally offering up a bloody, visceral pounding.

Screams of toxic love and staved affection flare up into nervous, unpredictable guitar twitches on ‘Gaslighter’ whilst on single ‘Bitter Winter’ stabbing riffs and vocals of angst are a whirlwind of Tough Loves’ erratic mood swings. She laments familiar racing thoughts of unease on ‘Seventeen’, where through not so rose-tinted goggles Anne reflects on her abiding inner doubt. Such a void of certainty in character is uniquely dark and disorienting amongst the rest of Tough Love’s labyrinthine disposition.