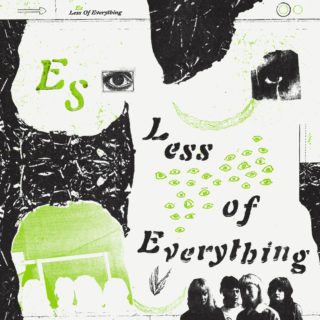 The anatomy of their aptly titled debut full-length release, Less Of Everything, is a structured critique of our dystopian reality. It’s blood-curdling capabilities maximise the boundaries of minimalism whilst sacrificing all but its own visceral rage and aggression.

Still carried by the exposure of their 2016 Object Relations EP, and later touring with the Thurston Moore Group, Es have been edging ever closer to becoming an established presence in London’s bustling underground DIY scene. Nothing about them sounds even remotely subtle. Intertwining sub-zero melodies and harbouring a truly menacing outlook, Es are the living nightmare to challenge a great deal of what might be deemed tired or worn-out about retro-centric punk music.

For the most part, Less Of Everything is a total barrage to all discernible senses. The melodies (if you can even call them that) are rabid, fast and mercilessly unpredictable, leaving little in the hope of respite.

There’s not a lot that differentiates each track; though ferociously delivered, Maria Tedemalm’s swirling vocals are robustly formulaic in the way they lacerate the precise drumming and pounding instrumentation. Writhing amongst the wreckage of tracks like ‘Mystery’ and ‘Kingdom Come’, she revels in the revved-up brutalism of her dilapidated surroundings. It’s this comfort in chaos that ultimately defines Es. Though somewhat archaic in their approach, this band still feel relevant in these turbulent times.