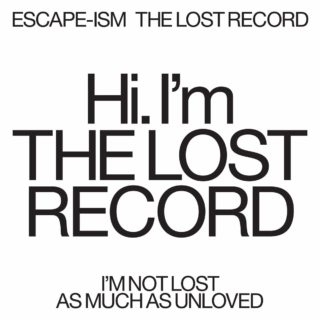 This record is called ‘The Lost Record’ despite it never having been missing, ignored or unappreciated. “…. for ESCAPE-ISM, it seemed easier to circumvent the rigmarole and just get on with it.” Well, good for them but not everyone got the opportunity to avoid this record and waste half an hour of their life listening to it. Weirdly, for a large portion of this album it seems that its architect – author, filmmaker and punk rock veteran Ian Svenonius – isn’t that interested in its existence so why should anyone else be. It’s a folly, to see if he could do it.

First song ‘Lost Record’ is sung from the perspective of the album itself, questioning why it is unloved by record companies and customers at the record shop flicking it away by its spine. Sort of answered its own question, really.

The finale is asking what star sign Frankenstein was over a guitar line so lo-fi it’s like a barely-being-played version of T-Rex’s ‘20th Century Boy’. If you take the name literally then you may ask if the album was forgotten because it was written and recorded in a single night whilst on speed and they had no recollection of it when they woke up. It’s minimal in every sense of the word – minimal musical ability, minimal instrumentation, production, effort and minimal result. At least in the world of underground punk, something like Liam Lynch’s ‘United States of Whatever’ has the good grace to be not just knowing but funny and catchy, something that ESCAPE-ISM lacks.