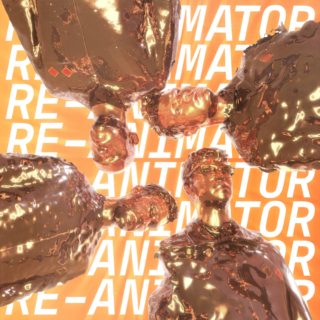 Averting their gaze from the Trump administration and post-Brexit Britain, there’s a refreshed sense of wonderment inspiring Manchester’s Everything Everything.

They’re well-versed in spontaneous and sophisticated guitar-wrangled art-pop; the frantic pace and dynamic inflection of both 2015’s Get To Heaven and its 2017 Mercury-nominated follow up, A Fever Dream, each prophesised a world accelerating towards catastrophe with little hope of slamming the breaks. Re-Animator opts out of scrutinising the immediate present and instead deflects its attention to our distant past. Taking inspiration from Julian Jaynes’ theory of the “bicameral mind”, ambitious sentiments theorising nature and our ancient evolution are sprinkled over slower, albeit equally grandiose, arrangements on ‘Bird Song’. Jonathan Higgs’ cloud-busting falsetto soars over absurd narration on ‘Planets’ singing, “To the bigots in the bat cave / I think some of you are permanently off my Christmas list.”

Well-known for wearing their influences firmly on their sleeve, it’s difficult to ignore Re-Animator’s incessant impulse to impersonate. Whilst Higgs’ faultless Thom Yorke impression on ‘It Was A Monstering’ is so uncanny it’s almost commendable, such shameless imitation ultimately devalues the album’s wider composition. To put it bluntly, Re-Animator reaches its best when Everything Everything sound like Everything Everything, instead of masquerading as someone else.