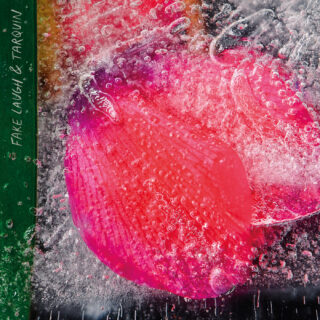 There’s something to be said about the meeting of two distinct minds. Collaboration is the musician’s bread and butter, leading variously to times of exceptional creativity or a test of a working relationship. The results can be unique and surprising or sound forced and clunky. Fuelled by a twinkling friendship, Fake Laugh & Tarquin have pulled from their individual backgrounds to produce a fun and varied debut. Since moving to London from their native Sussex, the duo have been following their own paths, the former as an indie-pop singer-songwriter, the latter an acclaimed dance producer. Combining their accumulated experience, Fake Laugh & Tarquin is a melody-driven quest for a completely modern sound.

Shimmering with tracks that bubble and bounce between emotive floorfillers and melancholic indie, the self-titled record is a jigsaw puzzle of reflections about our oddly-shaped world. Each song is a musical ride at the Fake Laugh & Tarquin amusement park: presenting grand electronica with a pop nous, mixing classical oboe and pulsating club bass, the album doesn’t pay much attention to genre; just when you think you’ve pinned these two down, they slip from your grasp, sneak up behind you and throw you head first into another high-octane track.

It’s Tarquin’s production that makes these tracks slick. A crowd-pleasing DJ outside of Fake Laugh & Tarquin, he doesn’t opt for a wave of crescendos on the record, instead weaving upbeat hyperpop and dubby electronic around Fake Laugh’s falsettos. Swelling with Moloko-inspired grooves, those vocals ground the album, making sure the galactic production doesn’t become lost in space. This element of sincerity ensures the album has a relatable human touch.

From hints of SOPHIE and Charli XCX to echoes of Django Django and Eats Everything, the scope that this record covers makes it fit to burst in the best way possible. Fake Laugh & Tarquin manage to pull off an experimental modern pop record that eclipses any misconceptions around collaborations.