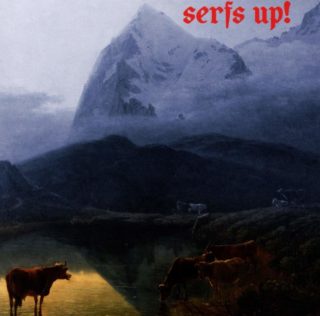 Since their inception in 2011, the south London soap opera that is Fat White Family have weathered an avalanche of internal crises, departures and – by the end of 2016 – near total implosion. Their fundamental problem, however, has never been the chaos that surrounds them. Doubtless no small problem for their individual members, it’s never been their bent towards destruction that has held them back. No; the problem has been the disconnect between talk and walk. The gulf between Fat White Family’s manifesto of transgression and the relative, well, conservatism of much of the music they’ve actually produced. A terrifying and incendiary live act, to be sure, but ‘Champagne Holocaust’ and ‘Songs for Our Mothers’ were grounded largely only an inch to the left of many of the groups onto which they would (deservedly) pour scorn. Potential abounded, but seldom realised. You can agree with the Fat Whites’ diagnosis of what’s been going wrong in British guitar music, but having asked that question were they ever really the answer?

Back, then, to the end of 2016, where we last left a Fat White Family on their knees. Every single member of the band had developed some form of substance problem. Crucial part of their nucleus, guitarist Saul Adamcewski, had been thrown out of the band owing to a vicious heroin addiction. Their cultural impetus was waning; bland imitators were finding it pretty easy to knock up a similar cocktail of the puerile and the nihilistic at home. The band were knackered; the band were skint. The side projects that began emanating from this detritus began proving more appealing than the main meal. Look at the Moonlandingz, the glam-synth outfit fronted by Lias Saoudi across 2017 delivering tauter and hookier material than on either Fat White record. Look at Insecure Men, through which a post-rehab, cleaned up Saul delivered a gorgeously realised record of woozy lounge pop.

So how, then, have Fat White Family found themselves on Domino Records and delivering their finest work to date? Make no mistake, ‘Serf’s Up’ is the sound of a band finally living up to their promise, and more.

At Saoudi’s insistence – supported firmly by their new label – the group left the capital and relocated to Sheffield, setting up a studio from scratch. Heroin and cocaine were banned from the premises, replaced by ketamine and weed (“far more creative drugs in my opinion,” sniffs Lias in the album’s press release”). Adamcewski was inducted back into the band.

It’s quickly apparent that something of Sheffield – that city of brutalist electronica – permeates this record – an album marked by a dominance of synthesizers, drums slathered in reverb and thick Jah Wobble basslines. Having exhausted rock’n’roll’s capacity for menace, the group have instead found a debauchery in disco, as well as acid house, that’s more genuinely thrilling than anything on this album’s two predecessors. More, they finally sound fully original. Listen to the dancefloor panic of ‘Fringe Runner’ – lifting from the pop rave of S’Express, it sounds fevered, brittle and paranoid. Opening track ‘Feet’ is aimed firmly at the dancefloor, and is at once sexy and almost spooky.

When the album’s most straightforwardly Fat White Family moment arrives – ‘Tastes Good With the Money’ – its louche, Glitter Band stomp arrives almost as reward after a minute of Gregorian chanting, playfully making this moment that bit more electrifying. “All my faith slides right into place,” the group’s various factions sing in unison, “the air up here so fresh and clean.” Lord, they might actually even mean it. Baxter Dury appears with a phenomenal guest spot, deadpanning hallucinations of “the lobster red glow of the apocalypse… a big mushroom cloud of the middle classes”.

This speaks to a visionary, almost celestial fervour at work across the whole of ‘Serf’s Up’ – in this sense, their first properly psychedelic record. Take ‘Kim’s Sunset’, a primal, CAN-aping riff that soundtracks the North Korean despot bringing the world to a nuclear sunset. The record summons a visionary horrorscape where world events collide with personal ruin and sexual euphoria. “My refugee is throbbing,” sings Lias in ‘Feet’, later, “I hope your children wash up bloated on my shore.” Though there was always a moral logic at work in their more uncomfortable lyrics – forcing empathy, forcing uncomfortable reflection – what they’re doing here is far more potent.

There’s other tricks too – the hazy exotica that typified ‘Insecure Men’ informs ‘Vagina Dentata’, and the obliquely state-of-the-nation, toff baiting ‘Oh Sebastian’ sees Saoudi accompanied only by a string section and glowing backing vocals. At points, the album’s closest analogue might be the headachey, widescreen comedown of Pulp’s ‘This is Hardcore’ (more Sheffield, then). But where that album felt like the end of something, this record is a triumph that feels, just as the end was in sight, like a real beginning. 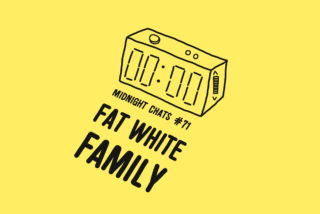 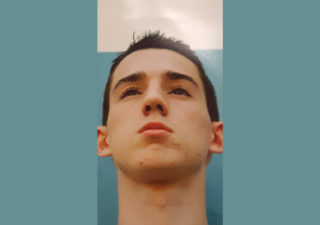 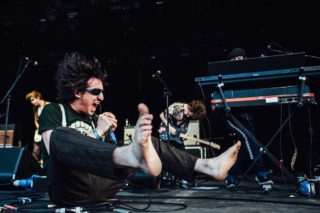