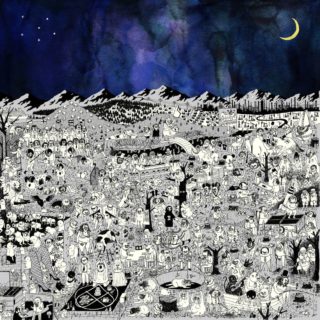 For a short time Josh Tillman appeared to be happy, in his own twisted, cynical way. The record that made him a star – 2015’s ‘I Love You, Honeybear’ – was a love letter to Emma, his new bride and muse, and although it focused on jealousy, anxiety and Father John Misty’s own narcissism, its themes of ugly love and blunt lust were true. He called himself and Emma two misanthropes in the title track, but at least now they had each other.

Of course, it turns out that two misanthropes don’t make for one doe-eyed couple who suddenly see everything in Disney Technicolor, and if ‘I Love You, Honeybear’ was a sarcastic title for a record of hard truths, it’s got nothing on the name ‘Pure Comedy’ – Tillman’s 75-minute slow avalanche of ballads that relentlessly nags at the absurdity of mankind.

There’s either nothing or everything funny about ‘Pure Comedy’ – deciding which is the fun and the torture, and when you’re done it’ll definitely tell you more about yourself than Josh Tillman. First you have to get through the thing. And then get through it again. For most, that won’t be as easy as putting on ‘I Love You, Honeybear’ and being instantly charmed by its jaunty ’70s Cali rock ways. ‘Pure Comedy’ is slow, made up of 12 long, mostly piano-led songs that take their cues from ‘Abbey Road’ era Paul McCartney, and one upbeat (and brilliant) track called ‘Total Entertainment Forever’ (you can guess what that’s about), which is almost cruelly placed second in the running order and is by far the shortest song here. It remains cutting – deceptively so – lambasting our endless hunger for media stimulation and fame from its opening line of “Bedding Taylor Swift, every night inside the Oculus Rift” to its bitter shame-on-us ending, which is a recurring theme throughout. Of course he’s right, but nobody wants to be put in the corner for 75-minutes, although more tiring is Tillman’s continual bashing of religion. ‘Pure Comedy’ has us all culpable in the technological age, but it’s God that gets it in the neck the most, and it grates by the dying seconds of the lush ‘Things That Would Have Been Helpful To Know Before The Revolution’, never mind the plain sad, stripped-bare ‘Two Wildly Different Perspectives’.

Also for the take down are art and boy bands (or rather the marketing of them and everything to our stupid, willing minds) on a country trundle called ‘The Memo’, and politics and ageing on ‘Birdie’, which is suitably floaty, although also the album’s weakest song. The 13-minute ‘Leaving LA’ initially appears to hold that mantle, but on closer inspection it should be heralded for a self-indulgence that might just be FJM’s biggest piss-take yet, and even if it isn’t, it’s a constant discovery of things to be miserable about.

As overwhelming as all this can be, Tillman is still in control of a voice that’s full of empathy, and knockout lines for making this life bearable. “Narcissus would have had a field day, if he could have just got online,” he yells on ‘The Memo’, while “I’ve got the world by the balls, am I supposed to behave?” (‘A Bigger Paper Bag’) perhaps calls into question how much FJM has been fucking with us.

‘Pure Comedy’ is a Black Mirror of a record, less ‘Modern Life Is Rubbish’, more, ‘Modern Life is A Complete Waste Of Time’. And yet that’s how it needs to be for Tillman’s only words of comfort to punch you in the gut so hard – the dead last, “There’s nothing to fear.”