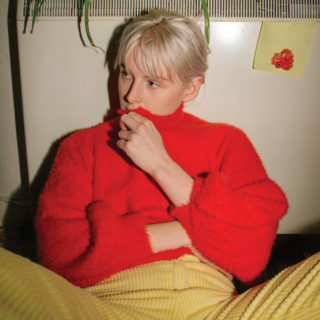 Whilst the creation of Fenne Lily’s second album BREACH predated the coronavirus lockdown, it was itself a product of isolation. During a month spent alone in Berlin, Lily wrote the record as she wrestled between a fear of loneliness and desire to be comfortable in her own company.

From its dreamlike intro ‘To Be A Woman Pt. 1’, BREACH is emotionally turbulent and raw, its lyrics full of insecurity and doomed romances, steadied all the while by Lily’s warm, quietly confident vocals. At times compassionate, at times derisive, the record captures some of Lily’s most musically compelling moments yet.

Lead single ‘Alapathy’ – its title a blend of “aleopathy” and “apathy” – embodies a mood of overthinking and anxiety, its impenetrable beat and driving percussion reminiscent of Julia Jacklin’s frantic post-break-up track ‘Pressure to Party’. Elsewhere, the lush ballad ‘Elliott’ sees Lily’s own insecurity turn to counsel, as she reminds the song’s subject, “Remember to forget / Everyone you ever wanted to be / Is dying the same death.”

Lily’s careful lyricism also looks inwards to her very beginning, its title inspired by her own breech position in the womb. She respells the word as “breach”, meaning “to break through”, intending to capture her own escape from walls she had built around herself. Throughout BREACH, harsh realities and existential questions sit side-by-side, creating a stunning record that is as relatable as it is profound.