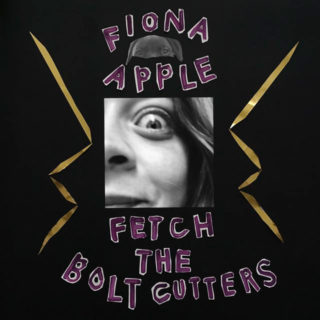 The power of Fetch The Bolt Cutters is immediately apparent – in its gnarled, physical performances, in its space-filling sound design, in its close-to-the-bone lyrical honesty. But the layers of nuance in Fiona Apple’s fifth work will take longer than three days to unravel. Personal betrayal and culture-wide injustices are tangled together just as they are in real life. Where one ends and another begins is sometimes impossible to see from close up.

For now, it might be best to talk about what we can see close up. Take the seamless sequencing. Apple opens with ‘I Want You to Love Me’, a giddy, swooning ballad where Apple knowingly (brilliantly) admits the cosmic insignificance of her problems, before choosing to dive deep into the ugly, primal urge of wanting to be loved. Still reeling, we are thrown into the panic of her high school years, and how the casual acknowledgement of a classmate pulled her out of internal rumination (“Shameika said I had potential”). Shameika’s words ring out on song after song, like on the following title track, where Apple comes out of her shell and into the present. We’re not used to hearing her so defeated (“I’m ashamed of what it did to me, of what I let get done / it stole my fun, it stole my fun,” she sighs), before fetching those bolt cutters and stepping out.

On ‘Under the Table’, she’s back full of the wit and righteous rage we know her for, causing havoc at a haughty dinner party, and on ‘Relay’, she’s taken a step back to acknowledge her part in a cycle of hatred. Each song is connected so skilfully, each with its own narrative growth, each being given the space to have its own impact. “Wipe it all away,”Apple meditates at the end of ‘Relay’ in a moment of calm, signalling the end the album’s first song cycle, with themes established and expectations set. For all its shocking bluster and unhinged passion, the album remains well-realised and full of empathy.

Back to the bigger picture. The record has sparked a rare kind of spectacle for art so uncompromising in its darkness. At the risk of being reductive, it is worth asking: when was the last “Event Album” that was also universally acclaimed as an instant classic? To my ears, you’d have to go back to Kendrick Lamar‘s 2015 masterpiece To Pimp a Butterfly. Or, for a more apt comparison, to a few months earlier with D’Angelo’s Black Messiah. That album also heralded the return of a notoriously reclusive living legend, at a time of great social unrest. Just like that record, Fetch the Bolt Cutters sharpens its artist’s style into a whole new beast – richly detailed, clearly studied, but stunningly raw. Conversations around its greatness and comparisons to other masterpieces are inevitable.

Black Messiah pulled from the familiar shared history of R&B and soul to unearth deep-rooted cultural racism. Fiona Apple’s songs are more knotted and singular, having just as much in common with the industrial folk of Tom Waits’ Bone Machine as it does with old
American Spirituals and blues standards. But it is just as much about a shared history. “We were cursed from the moment that he kissed us,” she snarls on ‘Newspaper’, a deeply unsettling story of patriarchal control that underlines the hold powerful misogynists can have over their partners, even out in public spaces. At key moments, Apple pulls from the American songbook to contrast national idealism with the viciousness of its reality. She twists the rah-rah enthusiasm of the Great American Musical into a gut-wrenching image of marital rape on ‘For Her’ – “Good Mornin’, good mornin’ / you raped me in the bed your daughter was born in,” she yells, the air in every room the where song plays sucked out.

Just as frequently, she sounds like only herself. That’s the most thrilling and impressive thing about Fetch The Bolt Cutters – how it pivots from extreme perspectives, how it grows in its contradictory sides between deep love and hatred, restraint and freedom. Like the very best music, it contains multitudes – it’s a rallying cry for those without a voice, a deep lesson in empathy, a dive into a singular mind, a damn good pop record. Listen. Find out what it means to you. We’ll be talking about it for a long time.