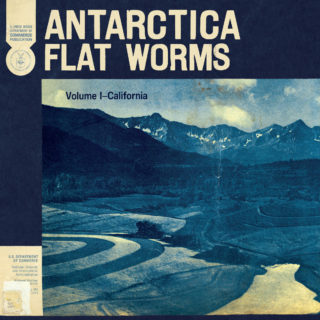 Though the term ‘supergroup’ can sometimes carry with it some degree of misplaced expectation, L.A. trio Flat Worms have always felt exempt from such a predetermined fate. Not only has their Petri dish of psychedelia-saturated post-punk been devastatingly potent in recent years, the band’s cohesive framework has proven them to be far more than some throwaway side project.

Scooped right from the barrel of John Dwyer’s fabled Castle Face Records, Flat Worms’ personnel partly make up the ranks of Thee Oh Sees, Ty Segall Band and Dream Boys. With all three members’ playing careers easily linked by connectable dots, Flatworms’ output feels distinctly unforced and organic. The band’s third full-length effort, Antarctica is a chaotic vision of the mundane; one that makes no attempt to stifle the sarcasm of its commentary.

Recorded in just six days inside Steve Albini’s Electrical Audio studio, Antarctica trades washed-out production for the sort of steely-faced surfaces in which you can see your bloody-nosed reflection as it batters you to a mangled pulp. Laying each apathetically recounted decade to landfill, ‘The Aughts’ is an exhausting sprint to the finish line. Chugging basslines and razor-sharp guitar riffs lacerate lead single, ‘Market Forces’, whilst the title track clings to the sort of dryly-spoken nihilism of any sure-fire satire.